A Passover Greeting From Netivyah

This Shabbat is the Shabbat of Passover. This holiday has several names, which I will elaborate on:

“Passover” – this name is given to the holiday because, during the plague of the death of the firstborn, God “passed over” the homes of the children of Israel.

The second name is the “Festival of Matzot.” This name comes from the matzot which are ​​eaten during the holiday, and they remind us of the bread of affliction that our forefathers ate during the Exodus.

The third name is the “Holiday of Freedom,” and it is called as such because in this holiday, the people of Israel went out from slavery to freedom.

The fourth name is the “Holiday of Spring,” simply because it is a holiday that falls in the springtime.

A Time to Clean Our Homes and Our Hearts

Passover is considered to be one of the main holidays of the Bible, because a large portion of the commandments found in the Bible are related to or are mentioned in Exodus. In Israel this holiday is especially profound. Weeks beforehand, the people of Israel begin preparing for the holiday by eating all of the leaven (bread, pasta, etc.) left in the home, and by not buying anymore.

After this, everyone cleans their home very thoroughly, scrubbing every corner, immersing all the kitchen utensils in boiling water, and wiping off every shelf and closet. We clean everything thoroughly, ensuring that not a crumb of leaven has been left behind.

Not a speck of leaven can be found in the house. As it is written in the commandment in Exodus 12:15:

“For seven days you are to eat bread made without yeast. On the first day remove the yeast from your houses, for whoever eats anything with yeast in it from the first day through the seventh must be cut off from Israel.” – Exodus 12:15 [NIV]

Passover cleaning is also mentioned in the New Testament:

“Get rid of the old yeast, so that you may be a new unleavened batch—as you really are. For Christ, our Passover lamb, has been sacrificed. Therefore let us keep the Festival, not with the old bread leavened with malice and wickedness, but with the unleavened bread of sincerity and truth.” – 1 Corinthians 5:7,8 [NIV]

The concept of Passover cleaning, as it is mentioned in the New Testament, is to clean out our lives thoroughly and deeply at least once a year. Getting rid of the old yeast, the leaven, symbolizes cleaning the sin from within ourselves.

The Apostle Paul teaches us in Galatians 5 that just a little bit of yeast can leaven the whole batch, and by that same token, a small sin can ruin our lives. Just as we clean our homes on Passover, it is time to cleanse sin from our hearts and minds.

Passover is a good time to look through our homes and to see what is not healthy for our family life. What we’re looking for may not necessarily be a sin, but it can be something that can harm the unity of the family.

It can be something as simple as having a TV on or using cell phones at the table during a family meal. Personally, I think it is a good idea to have a family meeting and to decide together what healthy changes you want to bring in light of the holiday.

I do not think it is right for these changes to be one-sided, but rather that they come as a mutual decision regarding which bad habits will be cleaned out of the home and out of the family.

The Focus is on the Children

Passover is one of the main feasts in Scripture, because of its notion of redemption, salvation, and the creation of God’s people. Passover is the connecting of a large group of people together with God.

“…You will be My people, and I will be your God.” A group of slaves went into the Red Sea, and they came out as a free, newborn nation.

It is such that in most of the holidays, including the Sabbath, we remember the Exodus from Egypt. On Passover, in fact, in all the Israeli and biblical holidays, the children are the main point. They sit at the important places around the table, they ask questions and sing the songs.

For instance, when the children taste the bitter herbs, they are tasting the memory of the bitter slavery. Another example is with the charoset, which is eaten as a reminder of the clay from which the children of Israel made bricks in Egypt. We feed the children matzot for a week, in order to show them that together as a people we fled from Egypt quickly so that there was no time to even prepare bread.

The Foundation of the Lord’s Supper

Passover is the foundation of the Lord’s Supper. The tradition of the Passover Seder, which has been practiced for centuries, includes four cups of wine.

These cups symbolize the four processes of salvation and redemption that the Israelites have undergone. Likewise, the afikoman, which is the most important matzah of Passover, has a profound meaning as well.

The four cups of wine describe the four stages of redemption from Egypt and are based upon the verses:

“…I will bring you out from under the yoke of the Egyptians. I will free you from being slaves to them, and I will redeem you with an outstretched arm and with mighty acts of judgment. I will take you as my own people…” – Exodus 6:6b,7a [NIV]

From being a nation of slaves, without any natural chance of attaining freedom, we became a nation that bears the banner of faith throughout the ages.

The whole matzah, the afikoman, which is presented at the beginning of the Seder, symbolizes the entire nation of Israel. While the part that is broken off and hidden embodies the Messiah.

The finding of the afikoman by the children at the end of the Seder exemplifies the arrival of the Messiah and the resurrection of the people. This is all in fact a custom to show hope for a better future on one hand and messianic connotation on the other.

When Yeshua, on the last night of His life, introduced the afikoman, saying that this afikoman is Him, the flesh of His flesh, He was saying that He is the awaited Messiah.

What is the main purpose of taking part in the Lord’s Supper? Like most ceremonies, holidays, and events, it is intended to commemorate the past and instruct towards the future. So that each time we break bread in the Lord’s Supper, we are united with the memory of Yeshua and the sacrifice He made for us, and we can examine how we can change our lives for the better.

The Lord’s Supper is for us to remember and to do:

Each time we take part in the Lord’s Supper, we remember what Yeshua did for us, and we correct our ways. The purpose of the sacrifice is not only to atone for sins, but also to bring remorse and the correction of our paths.

We need to think of the reason why we are taking part in eating the piece of bread, taking part in the sacrifice  and how we are going to change our paths as a result of it. This is essentially an act of repentance.

After the blessing and eating of the afikoman, the cup after the meal in the Passover Seder is the third cup, and it symbolizes redemption. Yeshua takes this cup and blesses it, saying:

As Messianic Jews, we wait for the next step, the fourth cup, where we say to Yeshua, “Blessed is He who comes in the name of the Lord.” We await the moment where we crown Yeshua, and Yeshua becomes the King of Israel, and in effect the King of the world and we shall be his subjects. 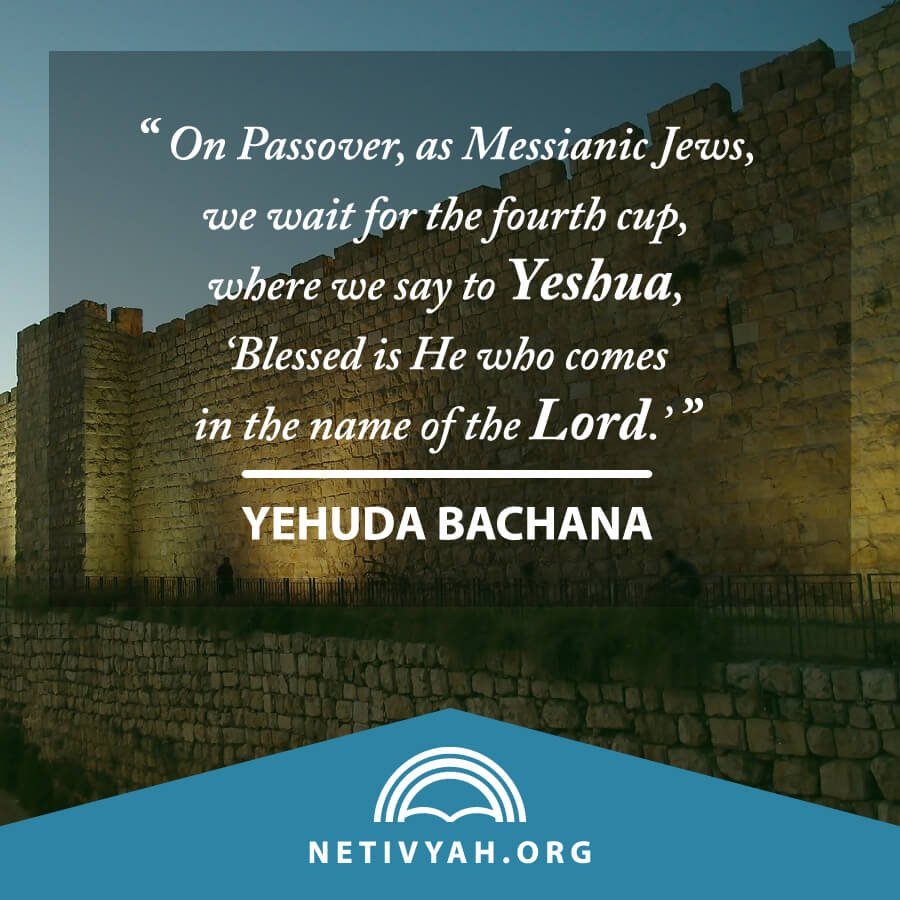 I would like to bless you with the greatest blessings for this Passover, an abundance of rest and satisfaction within your families. May this spring bring with it an air of renewal, refreshment, and great joy. To a happy and meaningful Passover, In the name of Yeshua the Messiah.

Netivyah is an Israeli non-profit organization that teaches God's Word and helps those in need. We present the teachings of Messiah Yeshua in a Jewish context, both in Israel and worldwide. We also feed the poor in Jerusalem, and invest in the next generation through youth programs and scholarships.